‘Most innovative yacht of 2011’ sinks

Its oversized windows, glass skylights, main deck pool area and beach club, which won it accolades last year for its innovative features were not enough to keep it afloat. Yogi, the 60m superyacht which won the 'Most Innovative Yacht of the Year of 2011' has sunk off the island of Skyros in Greece. 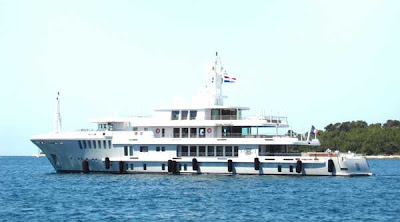 Eight guests and crew on board the luxury cruising yacht had a lucky escape after a Greek helicopter rescued them from the sinking vessel. While no real explanation for the sinking has yet been given, it is known that the French-flagged yacht was in gale-force winds and had lost engine power before the sinking, which appeared to be in deep water.

Both guests and crew had scrambled to the highest point on the yacht to await rescue as it flooded with water. Two Air Force helicopters and a Navy frigate, as well as coast guard vessels and four commercial ships headed to the assistance of the yacht after the captain sent out a distress signal on Friday morning.

All eight of the people aboard were picked up by the helicopter and flown to safety nearby. The owner was not on board, and the yacht was on a commercial charter at the time of the incident. The rescue was no doubt made easier by the small number of people on board - the yacht can cater for a total of 27.
Posted by arbroath at 6:07 am
Email ThisBlogThis!Share to TwitterShare to Facebook

Maybe there was more blow than the wind?
(http://www.cbc.ca/news/world/story/2012/02/18/italy-cruise-captain-drugs.html)

Maybe the innovation was it was also a submarine?