Everyone knows that dog is man’s best friend. For 2-year-old Alida Knobloch, her dog Mr. Gibbs is more than just a friend, he’s a true life-saver. Knobloch has a rare disease called neuroendocrine hyperplasia of infancy, a disorder which occurs in children. People with NEHI have a condition in which diseased portions of the lung filter oxygen through extra layers of cells, making it harder for the afflicted to breathe properly and get enough oxygen into the lungs. Due to that, Alida is attached to an oxygen tank almost constantly, taking time off the tank only for tasks such as bathing.

And that means any jaunt to the park or trip to the playground requires the little girl to drag around an oxygen tank, either in a small backpack or attached to a cart built by her father. Alida’s parents, Aaron and Debbie Knobloch, wanted to do something to help their older daughter navigate life despite having a tube trailing her at all times. “We’re trying to provide some independence for her,” said Aaron Knobloch, who works as a pilot for the Georgia Forest Service. “And then, after we saw this programme on TV, we thought, ‘What about a service animal?’” So Aaron and Debbie, a nurse at Gwinnett Medical Center, began to look into acquiring a dog which could carry the tank for Alida and follow her in her everyday activities. 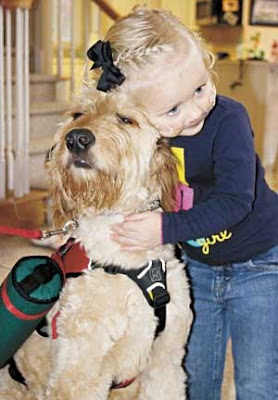 It wasn’t the easiest task. Most service animal groups work based on need, meaning Alida could sit on a waiting list for years, and the Knobloch’s felt uncomfortable trying to take a fully-trained animal that could otherwise go to people with more serious conditions. So the family looked into private trainers, finally settling with Loganville trainer Ashleigh Kinsley, who was able to provide them with 1-year-old Mr. Gibbs, who had been trained since a puppy. “He’s still learning, as we just got him a couple of weeks ago,” Knobloch said. “He’s very much a puppy in some ways, playful and gangly. But when he wears the vest, he’s all business and does really well, even in public.”

When Mr. Gibbs is put in the red service animal vest, which has pockets on either side for small oxygen tanks, he follows Alida everywhere, providing a lifeline between her and the supply of air she needs to breathe properly. Of course, even a playful dog can struggle to keep up with an active 2-year-old, but the Knoblochs say it’s going well so far. Mr. Gibbs is trained to follow her in any situation, climbing up playground equipment and going down slides with her, and he follows orders well, though the challenge is to ensure Mr. Gibbs takes Alida as his primary person. “We have to train him to follow Alida’s directions,” Knobloch said. “He follows our instructions, but getting him to listen to a 2-year-old is harder. But he’s getting used to her.”
Posted by arbroath at 6:06 am
Email ThisBlogThis!Share to TwitterShare to Facebook

See? Dogs are a Divine gift to humanity.