An unemployed Austrian man sawed his foot off, apparently to avoid being found fit to go back to work.

Hours before an appointment at the labour office to check on his health, the 56-year-old man held his left leg against an electric saw in his home workshop and severed his foot just above the ankle, Austrian broadcaster ORF reported. 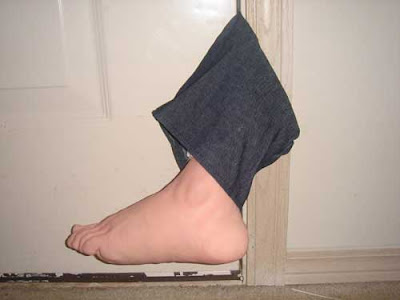 Bleeding profusely, the man from the province of Styria then threw the foot into an oven, hobbled to his garage and called an ambulance.

An emergency operation was unable to reattach the foot.
Posted by arbroath at 4:04 am
Email ThisBlogThis!Share to TwitterShare to Facebook

Remember that one time that German man posted an ad looking for someone to eat, and another German man responded, and he ate him. Oh yeah, this is just a little less disturbing than that.

Surely he can still work if he's sat down?

Okay that's todays excuse - what is he gonna do tomorrow to get out of work?

I've driven to work many times hoping this is the day someone drives into me head on, but I'm even too lazy to maim myself to avoid the tedious daily misery that is a 40 hour work week. I'll just soothe myself with weed, whiskey, and videogames until I'm provided by fate with the sweet release of death. Though I don't understand how missing a foot means you can't work.