Elephants in captivity are becoming too inbred, so a German researcher has amassed a sperm bank of wild elephant semen for zoos to draw on. There’s just one small problem – sperm is not a commodity bull elephants give up lightly. Zoos across the world are facing a growing crisis – the dwindling gene pool of their elephants. In fact, one rather drained male called Jackson has sired many of the captive calves born in the United States in the last ten years. That’s why, every couple of years, Thomas Hildebrandt of Berlin’s Institute for Zoo and Wildlife Research (IZW) takes to the South African skies in a helicopter over the savannah, searching for bulls. Once a potentially fertile specimen has been identified, the helicopter swoops down and Hildebrandt fires a narcotic dart to stun the animal.

There then follows a simple five-minute procedure, known as electro-ejaculation. “It’s an established medical method for paraplegic men which has been used for 25 or 30 years, though it’s rarely performed on wild animals,” Hildebrandt said. “A probe is inserted about three or four centimetres into the lower intestine, near the gonadal nerve centre,” he explained. “This is then stimulated with a 5 to 15 volt charge that causes a contraction of the entire reproductive tract, which leads to the sperm being forced out.” The biggest challenge in this somewhat eye-watering procedure is the powerful anaesthetic in the dart. This happens to trigger a muscle contraction that causes the elephant’s 1.5 metre long penis to retract into its cavity. This, according to the elephant insemination experts, takes some teasing out.

“The problem is, in order to extract the sperm hygienically, we have to get the tip out and clean it,” explains Hildebrandt. Once this is achieved and the sperm is safely collected, it is immediately frozen, and later thawed out and tested for various elephant diseases. This is all part of Project Frozen Dumbo, a project started two years ago to collect sperm for banks stored at the Beauval Zoo near St. Aignan in central France, and the International Conservation Centre in Pittsburgh Zoo in the US. There's only one snag – no elephant has yet been successfully inseminated with sperm that has previously been frozen. "But we’re close to it, we're very, very optimistic," said Hildebrandt. 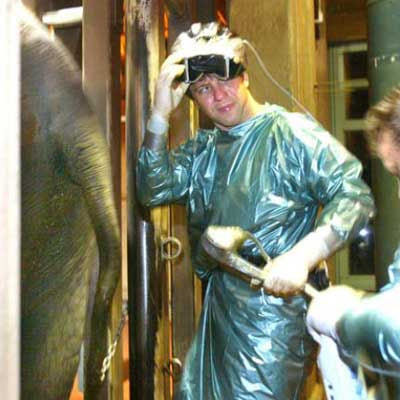 "There are many problems. Sperm are very fragile cells. Because they move, the entire propulsion system in the cells has to be preserved during the thawing out process, and can't be damaged by ice crystals." Currently it costs roughly €100,000 to obtain, transport and quarantine three litres of elephant sperm, theoretically enough to impregnate 65 elephant cows. One ejaculation is roughly 100 ml, exactly enough to fill a standard champagne glass, so a number of bulls have to be treated. This potentially makes the Project Frozen Dumbo much less expensive or traumatic for the animals than to transport them from zoo to zoo to mate. But first it has to work, Hildebrandt admitted. "The most important thing in this project is success," he said. "If we can't show that this investment and all this work results in babies, then no-one will support the research."
Posted by arbroath at 6:02 am
Email ThisBlogThis!Share to TwitterShare to Facebook

So what did you do at work today dear?

I'm not complaining about my job anymore.

Careful, you'll shoot and eye out with that thing.