A lorry driver has been fined after dozing off at the wheel and colliding with a motorway sign advising "Tiredness can kill - take a break".

David Loudon, 34, of Hamilton, admitted driving carelessly on the A74(M) in Dumfries and Galloway in March last year. Prior to the accident he had driven for more than two hours over the statutory limit without taking a break. 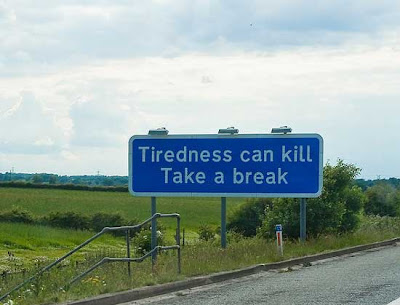 He was fined a total of £1,375 and had nine points endorsed on his licence. Dumfries Sheriff Court heard how the lorry crashed off the roadway and damaged 70 metres of fencing as well as the illuminated sign on the A74(M) just south of Johnstonebridge.

Loudon admitted driving carelessly and falling asleep in the northbound carriageway. He also admitted seven charges of failing to take legally-required driving breaks.
Posted by arbroath at 6:01 am
Email ThisBlogThis!Share to TwitterShare to Facebook