Khan Younis zoo in Gaza is using stuffed animals in its enclosures to help cut the costs. 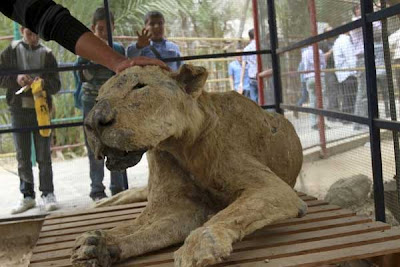 The animals that die at the zoo are stuffed and embalmed and put back on display.

The owner of the zoo, Mohammed Awaida, said they are doing this because there are not enough live animals left in Gaza following the war with Israel three years ago.

He believes the efforts will help children learn about the animals and taxidermy. The zoo is one of five in the Gaza strip, a densely populated area with 1.6 million people.
Posted by arbroath at 6:03 am
Email ThisBlogThis!Share to TwitterShare to Facebook

There's a stuffed leopard in the natural history museum in Oxford. It has a sign on it "please touch" :)

Sorry, my bad, it's a cheetah.
A photo of it (being molested) is quite near the end of : http://www.thedayafteryesterday.co.uk/2011/04/have-you-ever-touched-cheetahs-bumhole.html

These are definitely NOT done by Chuck Testa

Heh, thanks for that Ratz!