Jilted dentist pulls out all of ex-boyfriend’s teeth

A jilted dentist who pulled out all her boyfriend's teeth after he dumped her for another woman is facing three years in jail in Wroclaw, Poland. Anna Mackowiak, 34, was astonished when just days after breaking up with her, Marek Olszewski, 45, turned up at her surgery complaining of tooth ache. "I tried to be professional and detach myself from my emotions.

"But when I saw him lying there I just thought, 'What a bastard' and decided to take all his teeth out," she admitted., After putting him to sleep with a heavy dose of anesthetic, the spurned dentist locked the door and then began plucking his teeth out one by one. She then wrapped his head and jaw in bandage to prevent him opening his mouth and told him there had been complications and he would need to see a specialist. 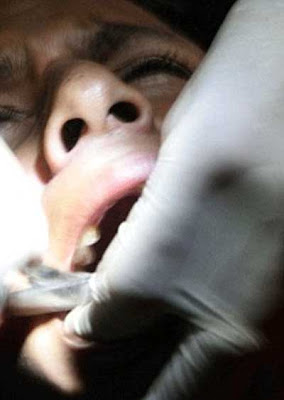 Toothless cabbie Marek said: "I knew something was wrong because when I woke up I couldn’t feel any teeth and my jaw was strapped up with bandages. "She told me my mouth was numb and I wouldn’t be able to feel anything for a while and that the bandage was there to protect the gums, but that I would need to see a specialist.

"I didn’t have any reason to doubt her, I mean I thought she was a professional. But when I got home I looked in the mirror and couldn’t f***ing believe it. The b**ch had emptied my mouth. The new girlfriend has now left me saying she can’t be with a man without teeth. And I’m going to have to pay a fortune on getting indents or something," he said. Prosecutors say the dentist is being investigated for medical malpractice and abusing the trust of a patient.
Posted by arbroath at 6:04 am
Email ThisBlogThis!Share to TwitterShare to Facebook

Okay, what she did was wrong, but that guy is an absolute idiot for going to his ex (whom he apparently dumped for another woman) for any type of professional service? What a moron.

License revoked! She MUTILATED the man! She should have her license revoked and she should go to PRISON! Also, the boyfriend needs to have his head examined for having an ex work on his teeth. This is why you NEVER have someone you are emotionally attached to (or in this case detached from) be your doctor, dentist, lawyer, etc.

This story is a hoax, check out the real story at:

well this is pretty sick. Act as a professional.

church street dental offers restorative dentistry for child and adult patients. we offer dental services like dental implants, Invisalign, dental crown, emergency dentistry, tooth implants, cosmetic dentistry, and other dental services for your family.
if you are looking for a dentist near chicopee then stop searching and contact us now.
dentist in chicopee

We have an experienced team of dentists in Brookline, MA. Since there are many dental problems that you can have if you are not having the right kind of dental services, you should think of having your teeth cleaned and repaired as early as possible. It would be best if you visited us at once to treat and improve your teeth immediately.
ascend dental

globus dental care center offers restorative dentistry for child and adult patients. we offer dental services like dental implants, Invisalign, dental crown, emergency dentistry, tooth implants, cosmetic dentistry, and other dental services for your family.
if you are looking for a dentist near union street lynn then stop searching and contact us now.


globus dental care center offers restorative dentistry for child and adult patients. we offer dental services like dental implants, Invisalign, dental crown, emergency dentistry, tooth implants, cosmetic dentistry, and other dental services for your family.
if you are looking for a dentist near union street lynn then stop searching and contact us now.


When you are in dire need of an emergency dentist in Northampton, Ma, there are quite a few options for those who have found themselves in the city of Northampton. You can search online and find several directories that list of dentists in the area. The best way to narrow down your choices is to look for a dentist in Northampton that has been recommended by either your family or a friend, or you can take the recommendation of a medical professional. Either way, the first thing you want to do is to take a look at the emergency dentist .
Dentist northampton ma


An emergency dentist is a highly trained professional who can respond quickly to dental emergencies in an immediate fashion.
A dentist with an emergency response program is able to provide immediate care and treatment of a wide range of dental problems.
This includes root canal therapy, filling crowns and bridges, gum reshaping, root canal treatment, extractions, orthodontic braces, and even surgery. Your family doctor or general dentist can provide routine preventative care and guidance, but they cannot guarantee that your teeth will not suffer from inevitable problems such as tooth decay and cavities.
emergency dentist east brunswick nj