A puppy that became stuck to a cactus in Phoenix, Arizona, has found a new home. More than 70 people showed up to the Arizona Humane Society to adopt the puppy after hearing about his story. 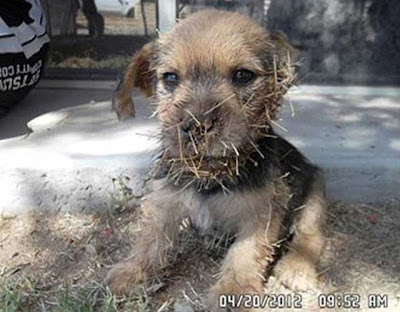 Someone rescued the 8-week-old puppy after hearing him crying when he couldn’t get out of a Cholla cactus. The AHS nursed him back to health and gave him the nickname “Cactus Jack.”

On Thursday, so many people showed up to adopt the puppy the AHS had to hold a lottery drawing to pick his new owner. When Sara Messerschmidt heard her name called she said she couldn’t help but scream with excitement.

“I'm shaking. I'm so excited. I wanted this so bad,” Messerschmidt said. “This story was just heart wrenching, heartbreaking but the thing that just drew my heart to it was the fact that he was that he just kept wagging his tail through all the hard times and heartache and pain,” said Messerschmidt.
Posted by arbroath at 6:05 am
Email ThisBlogThis!Share to TwitterShare to Facebook

What an adorable story!

It's nice that 8 other people adopted anyway.

Love the dogs, but eat the pigs and wear the cows.