A half-naked woman wearing hot pink duct tape attacked and injured three police officers in a bizarre incident on Saturday night outside a Seattle bar, police said. The outlandish drama began at about 8 p.m., when the woman began stripping off her clothes inside the bar and sticking hot pink duct tape on her upper body area, said Seattle police spokeswoman Renee Witt. The bartender ordered her to leave the bar, but she refused.

She then grabbed the bartender's arm, injuring him. After that, she attacked another female customer by clawing and scratching her face and eyes, Witt said. Police were called. As they pulled up, the woman ran outside and down the street, ducking into a nearby KFC/Taco Bell restaurant and hiding in the women's rest room. Officers found her and brought her outside, putting her in handcuffs. But as officers tried to place her inside the patrol car, she suddenly "freaked out," Witt said. 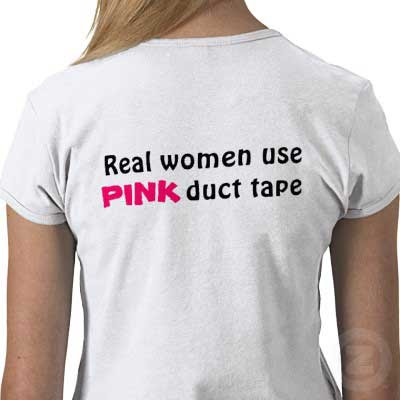 She began kicking at the legs and head of one officer. As police tried to pull her back inside the patrol car she suddenly did an over-the-head back flip and tumbled out the other side of the car. Once outside the patrol car, officers tried to get her under control. She kicked one officer in the head, causing a slight concussion. Another officer was kicked in the hand, which severed the tendon in his right pinkie finger.

The third officer was kicked in the jaw, causing swelling and slight dislocation, Witt said. All three officers and the suspect were taken to Harborview Medical Center. At the hospital, the suspect again went out of control and had to be given medication that eventually knocked her unconscious. The officers were treated and released. The suspect also was treated for minor injuries, then booked into King County Jail for investigation of assault.
Posted by arbroath at 6:07 am
Email ThisBlogThis!Share to TwitterShare to Facebook

Meth is a hell of a drug.