A cat has been employed to do a dog's job after taking up a security post at a toy warehouse in Southampton. Millie the Bengal cat, thought to be the world's first ever feline security guard, has been hired to guard some of the UK's best-selling toy ranges.

Bandai's warehouse was on the lookout for a new security guard when workers spotted the attentive moggy roaming around the factory floor. Millie's excellent climbing abilities and loud purr made her the prime candidate for the role, with deliveries expected to come in thick and fast over the coming weeks. 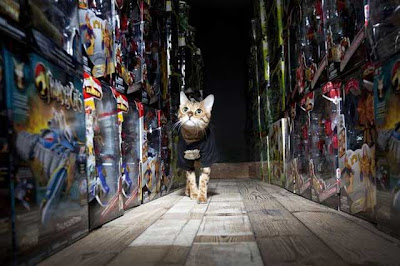 'We are expecting a bumper year this Christmas with orders starting to fly in from retailers putting in their requests, including new boys action toy releases for Ben 10 and Power Rangers,' a spokesman said. 'With the appointment of Millie the security cat, our toys are now very well protected.'

Millie's owner added: 'Millie has always had a very vigilant personality and doesn’t mind long hours alone. I’m not surprised she took up a career as a security guard – the toys are lucky to have such an attentive guardian.' Millie appears to be at home in her new role, with Bengal cats possessing similar sentry qualities to canines. Having put paw to paper on a contract, Millie will be paid in cat food and fish at the factory.
Posted by arbroath at 6:00 am
Email ThisBlogThis!Share to TwitterShare to Facebook