A 9-month-old Yorkie’s extended stay in Hannibal, Missouri, is proving just how dedicated a dog is to his master. Michael Siau, a truck driver, was passing through town last Friday when he took a break at a rest area. He stretched his legs, stood up for a while and used the restroom. “Didn’t even cross my mind that he might jump out, he never has before,” Siau said. “I jumped back in the truck, put it in gear and drove off. And I just thought he was in the back asleep.” But Rambo wasn’t there.

Siau made it all the way to Cedar Rapids, Iowa when he realized his companion wasn’t in the cab. He couldn’t turn the company truck he was driving around, his time would have been thrown off and he would’ve lost his job. The thought of not seeing Rambo again was devastating. Back in October, Rambo’s father, Ollie, who also accompanied Siau on trips, was run over. Siau was so distraught he took six months off. His daughter originally picked Rambo out to be her dog, but when she saw how down her father was, she gave him back. The last thing she wanted was her dad to be lonely on his trips. 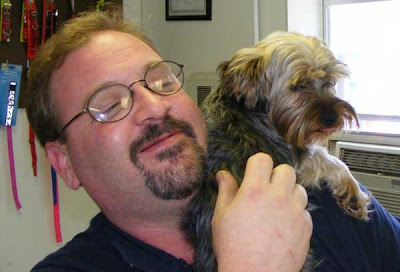 “I was freaking out. I had to calm down and think about how he could have possibly gotten out,” Siau said. “And it came to me that was the only time that I could have got out and I wouldn’t have seen him. I was just sure he was there.” Siau figured LaGrange was the closest police department to the rest stop so he called them to find out if they could help. They offered to look into it, but there wasn’t any word. The next two nights were restless. Rambo’s uncertainty left him on pins and needles. “I was in tears, sobbing, calling that same police department in LaGrange back Sunday morning because nobody had returned my call,” Siau said.

The dispatch told him it was actually Hannibal who had jurisdiction at that particular rest stop. They told him to get in touch with Hannibal’s Animal Control unit and assured him their services were top notch. “Three hours later, at 10:30 on Sunday morning, the officer called me and told me they found my dog,” Siau said. Rambo was just sitting there, waiting. The pup probably figured his master would return, but was more than likely confused as to why he was gone so long. Siau will make a return trip back through Hannibal and a stop will include the Northeast Missouri Humane Society where Rambo is fully taken care of and waiting to head back home.
Posted by arbroath at 6:07 am
Email ThisBlogThis!Share to TwitterShare to Facebook