Chinese residents were left terrified after mistaking a pink-skinned stray dog for either an escaped genetically modified pig or a strangely coloured mini-horse.

The bizarre breed of dog was spotted roaming around the streets Xinxiang in the Henan province, central China, sparking fears it has escaped from a nearby medical research centre. With its strange-coloured skin and hairless body, many observers speculated the rare breed could have been some sort of strange mutant pig. 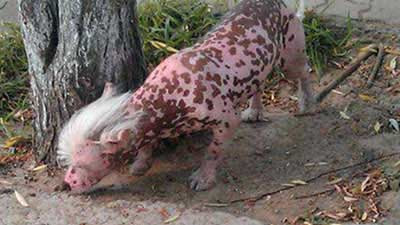 However given its white tufts of hair, unusual stance and wispy tail, the strange canine could even pass for a mini horse. One witness said: 'The pink skin makes it look just like pig gone wrong in some sort of genetic experiment.'

However police have denied the animal is the subject of a genetic experiment - confirming it is actually a breed known as a Chinese crested hairless dog. 'It is definitely a dog, and quite an expensive one at that,' said a spokesman.
Posted by arbroath at 6:05 am
Email ThisBlogThis!Share to TwitterShare to Facebook