Firefighters on Saturday rescued a 17-year-old boy whose arm became stuck in a vending machine while he was trying to steal a can of Coke. The incident occurred at the 24th Street trolley station in National City, California and was reported at about 5 a.m. 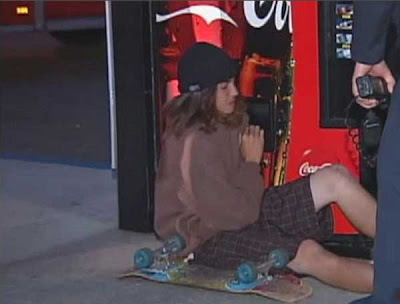 The teen apparently reached inside the receiving slot of the vending machine in an attempt to steal a soda. At that point, his arm became stuck inside the slot. A trolley rider saw the teen trapped in the machine and called for help.

Police, firefighters, paramedics and trolley security responded. The rescue took about an hour. Firefighters used axes, crowbars and an air chisel to try and dismantle the machine to free the teen. They eventually used a rotary saw to cut the lock on the door of the machine and the teen was extricated from the tight opening. 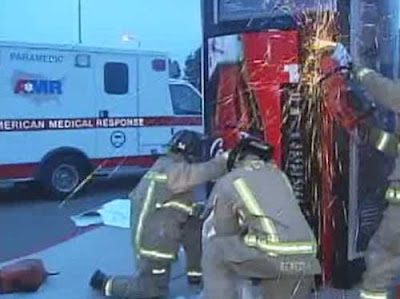 He was then taken to a waiting ambulance to be checked out. The teen's arm did show signs of scraping. He said his arm was sore but that he is OK. After medics released the teen, he was taken into custody by police, who said he may face charges of petty theft.

Cutting gear and axes? Or they could have tried getting in a service engineer with his toolkit. Would have probably taken a few minutes.

I want to laugh...okay, I did, but this is dangerous.

"Dangerous?" Fuck him; he's a thief. Should have let him sit there until he was nearly starved before releasing him. Maybe he'd learn something.

Then again, probably not. Anyone cheap enough to try to steal a $.50 soda is probably incapable of learning anything.

Anonymous, 50 cents doesn't seem too far out. I bought a coke today for 45p which works out at around 70 cents.I'm sure it depends on what particular brand of soda you're talking about and which country you live it, but half a dollar for a soda doesn't sound unreasonable to me.

BITD I recall people returning from holidays in the US claiming everything was cheaper over there. The one thing almost everybody cited as evidence was the price of a can of coke. If 50 cents for a can of coke sounds like some kind of sick joke to you now what has happened to your economy?

Last placed I worked it was $1.00 for a vending machine can of Coca Cola and that was 4 years ago.