A poverty-stricken six-year-old boy has been filmed suckling milk from a stray dog to suppress his hunger. “Our family is very poor, sometimes I get hungry,” the youngster, Chotu Kumar, said. “The dog doesn’t bite me. I like her and she likes me, she treats me like one of her puppies. I love to play with the dogs, they’re my friends.” Chotu lives with his mother Shanichari Devi, 37, his grandmother Amiya Devi, 60, and his two brothers Bola, 14, and three year old Mahesh in a mud house in Jharkhand, Eastern India. After his father’s death four years ago the family dropped below the poverty line. 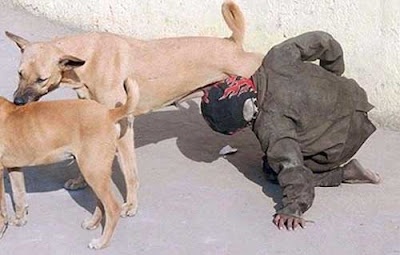 Chotu’s older brother was forced to go out to work to earn money for the family but he only brings home under £20 a month (1200INR) working at a nearby hotel. His mother and grandmother go out to the forest and collect firewood and try to find forest food but their average daily meals consist of vegetables and roti, a homemade Indian bread. According to UNICEF, fifty per cent of children under the age of three are malnourished in rural areas of Jharkhand. Meanwhile, two years ago Chotu started spending all of his time with a pack of dogs. Because the little boy didn’t go to school so had no friends, the dogs had become his friends. The family hadn’t eaten solid foods or milk for days when, one morning, Shanichari spotted her son sitting on the floor drinking milk from the dog’s teat.

She said: “While he was playing with the dogs outside the house I saw him drinking the bitch's milk. I was so shocked. I ran over and pulled him away. But ever since whenever he is hungry he has always slipped back. I have let him because I know how hungry he is. The dog has always been friendly with him and never attacks him. He often rides on her back and then he jumps off and sucks on her teat along with her pups. The bitch licks him while he feeds just like she does with her own pups.” The dog even sits outside the family’s mud house and barks for the youngster to come out to play. But when locals in the village found out about Chotu and his new friends they were angry and became worried that other children were at risk and that there would be a rabies outbreak.

“Villagers kept telling us he’d die of some disease if he carried on drinking it and it’d spread to the other children. But Chotu carried on,” Shanichari added. Eventually villagers reported Chotu to local officials and they stepped in. Chotu was admitted to school where he gets a free lunch and the authorities gave his family a food card, which allowed them to get food aid. But the dog continues to visit Chotu and it has become a habit for him to drink her milk. The little boy said: “I suck her milk three times a day and it tastes sweet like sugar. Many people in the village don't like my friendship with the dogs but I am happy, if she isn’t near my home I go looking for her outside the village. She’s always happy to see me and lets me have some milk.”

With another video at the bottom of the page.
Posted by arbroath at 6:07 am
Email ThisBlogThis!Share to TwitterShare to Facebook