An obsessed lover in New Zealand built a hideout inside his ex-partner's house and used it to spy on her. The 25-year-old man - who has name suppression - spent many hours in the hidden cavity, under a flight of stairs, and stocked it with clothes, bedding, food, candles, torches - and an arsenal of weapons.

He also cut holes in the plasterboard of the hideout and created trapdoors, giving him access to the whole house. He was caught after he emerged from the hiding spot and lashed out with a spade when another man visited his former partner at the Lower Hutt home about 3am on April 1. Police arrested him later that day after he was found hiding under the home in Epuni. 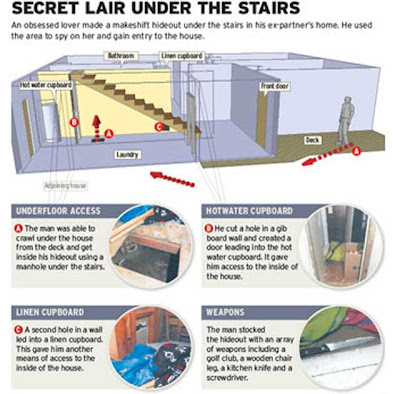 He was taken to hospital with bite wounds after a police dog was sent to help flush him out. In Wellington District Court this week, Judge Peter Hobbs sentenced the man to three years and seven months' jail on 10 charges that included aggravated burglary, assault with a weapon, threatening to kill, assault on a woman, wilful trespass, being unlawfully in a building and wilful damage.

The judge said the man wasn't the first to become "unhinged and obsessed" after a breakup but the offending was premeditated and "completely inappropriate". He took into account the man's guilty plea, remorse and mental health issues when deciding his sentence. "It appears you are a man of some promise and this offending resulted largely from an emotional breakdown and an addiction to methamphetamine."

Full story here.
Posted by arbroath at 6:07 am
Email ThisBlogThis!Share to TwitterShare to Facebook