A farmer who was arrested last month expressed his displeasure on Thursday afternoon in Newport by driving a heavy tractor over seven police vehicles owned by the Orleans County Sheriff’s Department. State police estimated the damage at about $250,000. No one was hurt. Roger Pion, 34, was jailed for lack of $15,000 bail at the Northern State Correctional Facility in Newport to await arraignment on 11 charges. Pion is facing seven counts of felony unlawful mischief and one misdemeanor count of unlawful mischief on suspicion of damaging the cars. 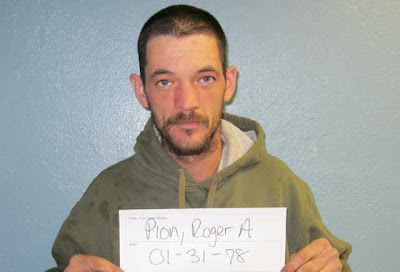 Pion also is facing charges of leaving the scene of an accident, grossly negligent operation and aggravated assault on Newport City police on allegations of trying to back the tractor into a city cruiser after fleeing the original scene. “It’s more than half our fleet. We have 11 cars,” Chief Deputy Sheriff Phil Brooks said. He said the cruisers were in three rows. He said all the vehicles were insured. Brooks estimated that the cruisers averaged about $40,000 fully equipped. He said at least one cruiser had a laptop in it. Other equipment, such as radar, were in the vehicles when the tractor ran them over. “It’s pretty much the biggest tractor you can get,” Newport City Police Chief Seth DiSanto said. 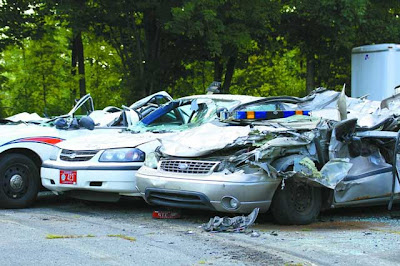 “It was a massive tractor. It has four 6-foot tandem wheels on the back. It was red. It must be at least a 15-ton tractor,” The tractor was owned by the suspect’s parents, Armand and Linda Pion of Newport, police said. Brooks said five of the damaged vehicles were fully marked red, white and black cruisers, and two were unmarked, including a transport van. He said an eighth car, belonging to the department bookkeeper, was pushed out of the way by the tractor in an effort to get at the cruisers. It had minor damage. It was unclear why Pion might have taken out his wrath on the Sheriff’s Department when he was arrested by a neighbouring agency. Newport police arrested Pion on July 3 on charges of resisting arrest and possession of marijuana, said DiSanto, a former Shelburne police officer in his first week as Newport chief.

Pion was issued a citation in those cases ordering him to appear in Superior Court next Tuesday, DiSanto said. Pion also was jailed that night at the request of the Vermont Probation and Parole Office. Chief Deputy Sheriff Phil Brooks said he and a couple deputies were inside their office on Thursday when a 911 call came in — and a car horn started going off in one of the crushed cruisers. Brooks said he ran to a nearby service station where another cruiser was being worked on and jumped in to pursue the tractor, but soon learned that Newport City police had stopped the tractor about two miles away. Brooks said Pion was turned over to the Vermont State Police, which began conducting an independent investigation.
Posted by arbroath at 6:06 am
Email ThisBlogThis!Share to TwitterShare to Facebook