A Sri Lankan court has given suspended jail terms to three French tourists for wounding the religious feelings of Buddhists by taking pictures deemed insulting. Two women and one man were detained in the southern town of Galle after a photographic laboratory alerted police. 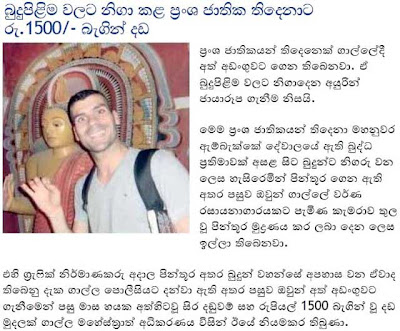 The pictures show the travellers posing with Buddha statues and pretending to kiss one of them. Mistreatment of Buddhist images and artefacts is strictly taboo in the country. Most of Sri Lanka's majority ethnic Sinhalese are Theravada Buddhist. The incident is alleged to have taken place at a temple in the central town of Kandy. 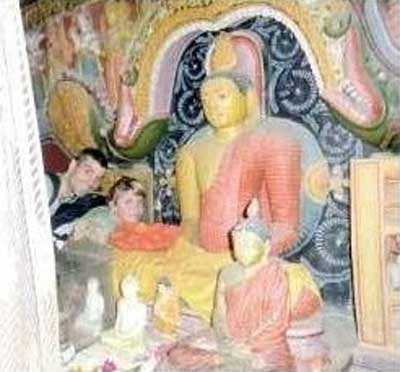 Police spokesman, Ajith Rohana, said the French party had visited the laboratory to get pictures printed. The images were impounded after the owner of the photographic laboratory alerted police, but they were later posted on a Sri Lankan website. 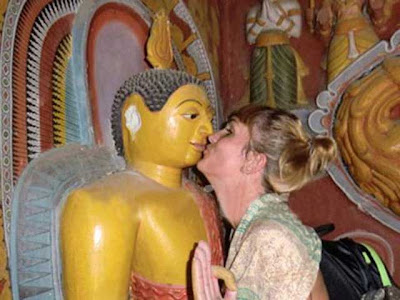 On Tuesday a magistrate sentenced the trio to six months in prison with hard labour, suspended for five years - which means they will not actually serve any time in jail. The court also levied a fine of 1,500 rupees (£7, $11) on them. They were convicted under a section of the Penal Code which outlaws deeds intended to wound or insult "the religious feelings of any class of persons" through acts committed in, upon or near sacred objects or places of worship.
Posted by arbroath at 6:09 am
Email ThisBlogThis!Share to TwitterShare to Facebook

I find it disturbing that a man who was explicitly clear on the point that he was not a deity and did not wish to be treated as one by history has been elevated to godhood by doltish simpletons like those in Sri Lanka. Hell, he probably would have joined with the tourists in mocking the ridiculous icons of himself.

The French don't have digital cameras? In which case they don't have to take the film to a lab for processing.
Other than that, Buddha looks like he's smiling at being kissed.

Can you imagine if someone tried to kiss Jesus on the cross? Kiss the statue of a saint? I heartily agree with Anon#1 about the Buddha wishes, although I kind of doubt Jesus would like crucifixes very much either.