A planned new statue of the Jolly Fisherman, mascot of Skegness, has been criticised as “ugly” after it was redesigned due to health and safety concerns. For more than 100 years he has been greeting visitors to the seaside with his arms outstretched in welcome.

But now the Jolly Fisherman, the mascot of Skegness since 1908, has been ordered to adopt a less exuberant pose - on “health and safety” grounds. The design for a new statue on the town’s station plaza portrays the fisherman with his arms clamped by his sides, holding a beach ball and patting a seal pup. 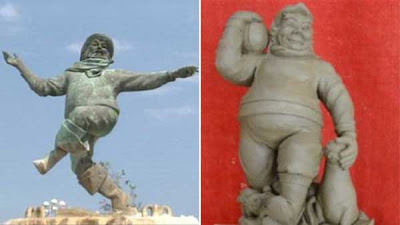 Council chiefs said the change was necessary to prevent children swinging on the arms, getting hurt and claiming compensation. But they have agreed to reconsider the design after critics called it “ugly” and compared it to Buddha or a gargoyle. Mark Anderson, the mayor of Skegness, said: “We don’t want people to make a farce of our logo and our town, and this to me is a farce.”

Anita Ruffle, a senior manager at Lincolnshire county council, said: “We are trying to keep his arms in because we did feel there was the issue of health and safety.” A council spokesman said the aim was to avoid a design which would “entice children or whoever to swing on the arms of the statue, which might lead to some claims”.

I'm interested in knowing how many cases they've had in terms of injury due to the outstretched arms. Does it even warrant a change?

The anonymous poster is right. The council should be forthcoming about the number and cost to the public purse of previous cases.

Sounds to me like yet another case of a self important interfering busybody using H&S as justification for being a killjoy.

Have they really thought about the risks to tourists properly? The sea's a bit dangerous and what if somebody were to fall off the pier. There are so many risks to the health and safety of tourists that the council better ban them straight away.

And have they considered the obvious need for a man with a red flag walking ahead of all council owned vehicles. After all somebody might sue the council were they to have an accident.

Oh FFS! This is why councils should only employ people who have worked in the private sector for at least ten years. Too many people working in local government are completely divorced from reality.

They need to ban cars too. Because they are dangerous.

Ok, I gotta say...I'm from the U.S., and there is ALL kinds of wrong with my country. BUT seriously, Britain's "Health and Safety" regulations are numbingly mind-blowing.

Here's an idea - don't give compensation to idiots.

This is down to a idiotic local authority being scared of being sued. They are calling it a health and safety issue to try to divert the blame.