A woman kayaking in the middle of a California bay has captured the moment a massive whale unexpectedly jumped out of the water just metres away from her daughter. 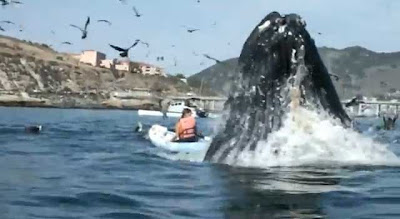 Rhonda Burmeister was out paddling with her daughter at Port San Luis at the weekend when a swarm of seagulls started diving into a nearby patch of water.

Moments later a humpback whale jumped out of the water right beside them. While she admits the up close encounter could have ended badly, Ms Burmeister said it was one of the best experiences of her life.

A nearby couple weren't so lucky, according to Ms Burmeister, who said they were knocked out of the kayak by the whale.

Posted by arbroath at 6:05 am
Email ThisBlogThis!Share to TwitterShare to Facebook