An African man munched his way through hundreds of dead black caterpillars after they were discovered in his luggage by border guards at Switzerland's EuroAirport outside Basel.

Adrian Onobanjo, 47, had more than 15 kilos of dead black caterpillars in plastic bags hidden in his luggage when he was stopped and searched after arriving on a plane from Togo. Border guard spokesman Patrick Gantenbein said: "Even border guards hardened by the bizarre things we have had to deal with were shocked by this particular case. 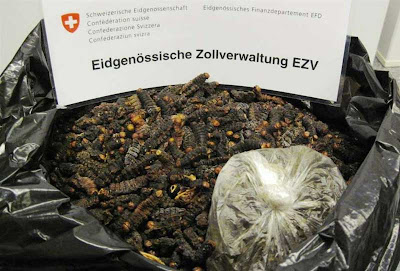 "The man obviously knew he shouldn't have been trying to bring them into the country as they were hidden under a false bottom in his suitcase and only discovered with an X-ray. He tried to tell us that it was a special type of root, but some of them were still moving. "Then he claimed that as they were for personal use he should still be allowed to bring them into the country because they were a snack, and he was addicted to them."

Border Guard section chief Martin Leuenberger who was on duty at the time said: "The smell from the caterpillars that were mostly dead was pretty unbearable but it didn't seem to bother the man – and when he was told they would be kept and destroyed he grabbed as many as he could and started munching them. He said they were a delicacy and should not be wasted." The remainder of the caterpillars were stored in a sealed container in the fridge overnight and are due to be destroyed.
Posted by arbroath at 6:06 am
Email ThisBlogThis!Share to TwitterShare to Facebook