A Brazilian construction worker in Rio de Janeiro has had a "miraculous" escape after he was rushed to hospital with a steel rod through his brain. The six-foot (two-metre) metal rod fell from the fifth floor of a building Eduardo Leite was working on and went straight through the 24-year-old's hard hat. 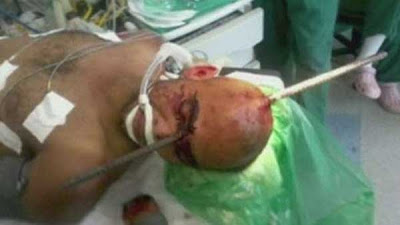 He was taken to Miguel Couto Hospital with one end of the rod sticking out of the top of his head and the other protruding from between his eyes. Mr Leite's wife, Lilian Regina da Silva Costa, said: "They told me he was laying down (in the ambulance) with the bar pointing upward. He was holding it and his face covered in blood. His look was as if nothing had happened. 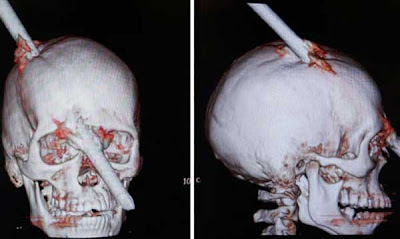 "When he arrived he told the doctors he wasn't feeling anything, no pain, nothing. It's unbelievable." Dr Luiz Aleandre Essinger, who treated Mr Leite, said: "It is a very uncommon injury this type of trauma, a steel rod that goes through the patient's brain. It enters through the top of the head and goes out between the eyes. The fact that the patient arrived here lucid and talking is incredible."

Doctors removed the rod during a five-hour operation and Mr Leite was able to speak, eat and move his arms and legs afterwards, the hospital said. Ruy Monteiro, the head of neurosurgery, said he escaped losing his eye and becoming paralysed down the left side of his body by mere centimetres. He said the bar entered a "non-eloquent" area of his brain, a part that does not have a major known function.
Posted by arbroath at 6:04 am
Email ThisBlogThis!Share to TwitterShare to Facebook

Modern day Phineas Gage. Wonder if his personality will change too.