Black howler monkeys at an Argentinian ecological park have been suffering depression following the death of two of the oldest females in the group and had to be given medication because they refused to eat.

Two alpha females died 1 1/2 years ago from natural causes at the Rio Cuarto Urban Ecological Park some 650 kilometres (400 miles) west of Buenos Aires, and from that moment "their male companions began suffering depression and four let themselves die of sadness," park director Miriam Rodriguez said. The black howler monkeys in this 12-hectare (30-acre) park "live in a group and are very close to one another," Rodriguez said. 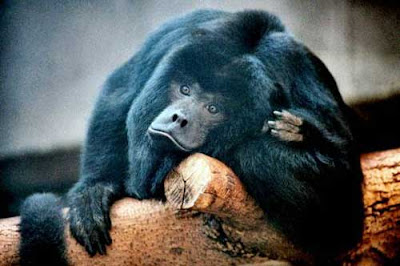 "When the females died, we noticed the others behaving oddly, but we thought it might have been something they ate." Concerned about their lethargy and refusal to eat, park officials consulted specialists at the nearby Cordoba Zoo, who told them "the animals could be going through a phase of acute depression," Rodriguez said.

After several analyses, psychiatrist Sergio Castillo confirmed the diagnosis of depression and two months ago prescribed a treatment based on sertraline, "a mineral derived from the serotonin used in humans to reverse different symptoms originating from compulsive disorders or depression," veterinarian Ezequiel Carrizo said. There was initially some resistance to the treatment since it seemed "ridiculous to give them anti-depression medication even if it was only a minimum dose," Rodriguez said, adding that "it has begun to raise the monkeys' spirits."
Posted by arbroath at 6:05 am
Email ThisBlogThis!Share to TwitterShare to Facebook