Taiwanese minister says men should sit down to urinate

A Taiwanese minister has caused widespread debate on hygiene by suggesting that men should sit down while urinating instead of standing up. Stephen Shen, Environmental Protection Administration (EPA) minister, said that sitting on the toilet like women do creates a cleaner environment.

Officials are to ask local governments this week to put up notices in public places advising men to sit. While many women favour the suggestion, a lot of men say it would be hard to stop doing what they are used to. But EPA officials insist that it can be done. 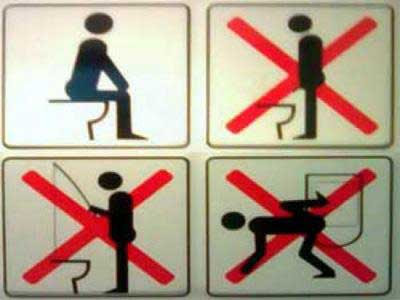 "We want to learn from Japan and Sweden," said Yuan Shaw-jing, EPA director general of environmental santitation and toxic substance maintenance. "In Japan, we heard 30% of the men sit," he added. nspectors regularly grade Taiwan's estimated 100,000 public toilets, with most of receiving high marks.

But EPA officials say there is room for improvement, as some toilets are still smelly because of urine spatter. While the agency said that it cannot force men to change their habits, it will ask local governments this week to put notices in public toilets with the suggestion. As for Mr Shen, the EPA confirmed that he himself practices what he suggests - at home and while using public toilets.
Posted by arbroath at 6:03 am
Email ThisBlogThis!Share to TwitterShare to Facebook

Men shouldn't need encouraging to sit down to pee.
Definitive studdies have shown that men who do pee sitting down have an almost 0% incidence of prostate cancer.
If I were a man, I surely wouldn't need any other inducement.