A supermarket chain which advertises using a slogan that urges more common sense in shopping has been selling peeled bananas on plastic trays wrapped in plastic film.

German-owned Billa supermarket chain, part of the Rewe group has thousands of stores in 9 European countries. Staff said the sale of ready-peeled bananas was a "one off" mistake and apologised, saying it would not happen again. 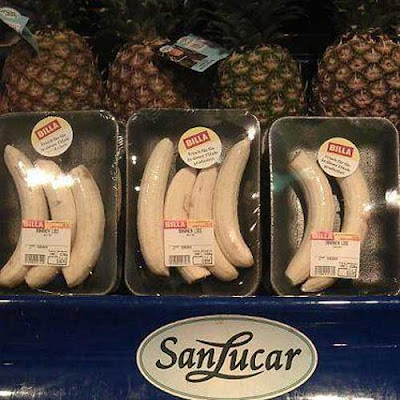 Customers have threatened to boycott the shops in response. One said that selling ready peeled bananas in a plastic package was the ultimate symbol of waste and the throw-away society.

A spokesman for Greenpeace in Austria where the peeled bananas had been on sale said: "If there is an easy to open ready packed food it's the banana - peeling it only to pack it in environmentally unfriendly plastic is just madness."
Posted by arbroath at 6:07 am
Email ThisBlogThis!Share to TwitterShare to Facebook

Like what marko said. I saw the picture and read the headline, and assumed it was a deliberate political stunt.