An Iranian cleric said he was beaten by a woman in the northern province of Semnan after giving her a warning for being “badly covered.”

Hojatoleslam Ali Beheshti said he encountered the woman in the street while on his way to the mosque in the town of Shahmirzad, and asked her to cover herself up, to which she replied “you, cover your eyes.” The cleric repeated his warning, which he said prompted her to insult and push him. 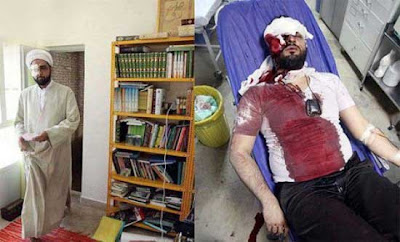 “I fell on my back on the floor,” Beheshti said. “I don’t know what happened after that, all I could feel was the kicks of this woman who was insulting me and attacking me.” Since the 1979 revolution that brought Shiite Muslim religious leaders to power, women in Iran have been required to cover their hair and body curves in public with head-scarves and loose-fitting coats, to protect religious values and “preserve society’s morals and security.”

The government condemns short, tight and colorful coats and loosely tied head-scarves, and routinely organizes police patrols to enforce the Islamic dress code. Public surveillance increases in summer when some women opt for flimsier clothing.  Beheshti said he was hospitalised for three days. The Iranian cleric said it was his religious duty to apply the principle of “commanding right and forbidding wrong,” and that he would continue to do so even after living through what he called “the worst day of my life.”
Posted by arbroath at 6:02 am
Email ThisBlogThis!Share to TwitterShare to Facebook

Bwahahahaha! I have no sympathy. This is a country where people, especially women, are beaten for wearing the "wrong" clothes. Suck it up, mr cleric, and you never know you might just learn something.

Hah, hopefully he'll not try that with any other women for fear of another ass-whooping. If he tried that with my boss he'd still be looking for his nose.

Good for her! He should have kept his mouth shut.

Smashing. But that's nowt compared to the thick ear I'd have given the bugger.

Alright!!! Hurrah for badly clad woman ! If men don't want to see women dressed improperly they should wear blinders on their OWN eyes.

Crickey - he normally has to pay good money for that kind of service.

More!! It starts with one

^ Agree ^ Iran allows sex changes and many gay men opt for it to avoid persecution. I hope it was a woman for what it's worth.

Police: can you describe her?
Cleric: How could I? She was wearing this thingy on her face and pretty much dressed like every other woman on the street.

Let's hope he's the first of many.

One can only hope he runs across the same woman again.

no credibility with the other dinosaurs now. he will have to move to a different city where none knows about him having had his ass kicked by a woman. loser.

Don't any of you realize that this story is not over? Within the next few days, his religious fanatic buddies will find this woman, & will band together to seek revenge. Unlike her, they won't stop at just beating her up either. They will beat her & kill her. They may also subject her to other forms of abuse. They will also attack anyone who tries to help or protect her. Then, to top it off, they will have the audacity to put their noses in the air & proclaim that their actions were 'God's Will'. I hope that woman has enough sense to get herself out of Iran, & wish her the best of luck.

When will people learn that the root of 99% of violence is either directly or indirectly caused by religious beliefs. Morals stand by themselves. There is no need to fear a god.
Quite frankly, this guy deserved it.
It's about time that these women stand up for their rights and fight against the misogynistic religion that they are forced to follow.

Hahaha!
I hope it was a "cross dresser" that pounded the boogers out of his sorry arss!