Firefighters called to rescue man with head stuck in bin

A man had to be freed by firefighters after getting his head stuck in a bin in the centre of Aberdeen on Sunday.

Grampian Fire and Rescue officers called to the Castlegate took around 15 minutes to cut the 52-year-old man free. 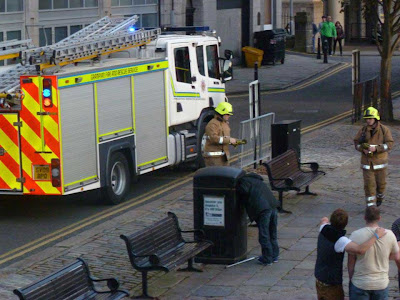 The man, who is believed to be local, was taken by ambulance to Aberdeen Royal Infirmary where he was treated for facial injuries before being released.

A Grampian Police spokesman said they were unsure what the man was looking for.
Posted by arbroath at 6:01 am
Email ThisBlogThis!Share to TwitterShare to Facebook

It's Aberdeen. He was looking for some excitement.

Is that how the Cambridge busker started out?