Thousands of disciples seeking a cure from a so called holy spring said to cure any illness got to the bottom of its miraculous powers when it gave them all diarrhoea.

The spring - in Shicangxia, Zhejiang province, eastern China - is famed locally for washing away skin blemishes. 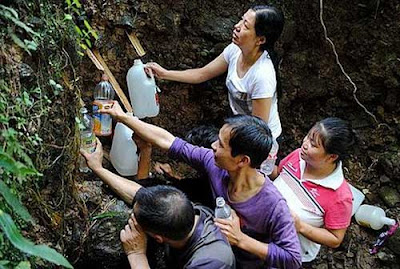 But thousands of visitors during China's Moon Festival decided to drink the healing waters instead, only to find themselves stricken with agonising stomach upsets.

"People were queuing all through the night to get to the water but then they started to form another queue - for the public toilets," said one local. "We warned them not to drink it but they thought we were trying to keep it to ourselves. When we drink it we boil it first," he added.
Posted by arbroath at 6:02 am
Email ThisBlogThis!Share to TwitterShare to Facebook

Haha God works in mysterious ways...those people were full of s**t,but not now.