Police in Poland have released a photofit of the prime suspect in a bank robbery - complete with his ski mask disguise.

The image, released after a £10,000 bureau de change hold up in Gronowo, shows only the suspect's brown eyes. To add insult to injury, detectives accidentally released the name of their sole witness, who had only agreed to speak to them if he could remain anonymous. 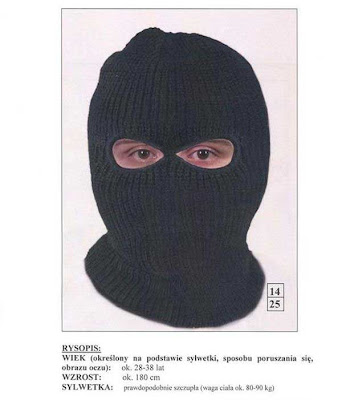 "We haven't excelled ourselves this time," admitted police spokesman Tomasz Stawarski. "The robber kept his mask on all the time so our artist didn't have anything to go on apart from the colour of his eyes," he added.

Detectives have ordered local media not to publish the witness's name and to remove his identity from any computer databases. "It was a mistake to name him. He is now under police protection," said the spokesman.
Posted by arbroath at 6:07 am
Email ThisBlogThis!Share to TwitterShare to Facebook

That rules out how many people already!