Sniffer mice being trained in Israel

An Israeli company is aiming to revolutionise the way explosives, narcotics and even money are detected at airports, docks and border crossings with the help of specially trained mice. The system, developed by the Herzliya-based BioExplorers, is simple: a traveller stands inside a small booth and is hit by a gentle blast of air that is then sucked into an small opaque chamber, where a group of eight mice are on duty. After eight seconds, assuming the subject is all clear, a green light appears and the barrier opens. But if the air smells of a suspicious material the mice have been trained to detect, they gather in the so-called reporting compartment, which raises an alarm. "The idea began in 2000-2001, when there were many suicide bombings on (Israeli) buses," said BioExplorers founder and chief technology officer Eran Lumbroso. 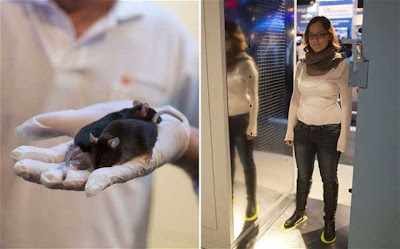 "I was in the army at the time, and the idea emerged to use small animals instead of dogs in detecting suicide bombers." After leaving the army in 2004, Lumbroso continued work on the project, running tests with different types of animals, portals and training methods. Mice were eventually chosen because of their keen noses and diminutive size. "They can be trained to sniff out drugs, money, even remainders of pesticides on agricultural produce," explains Lumbroso, who is a biologist. "They have a very developed sense of smell, more than that of dogs," he said, pointing out that sniffer dogs can also be intrusive and sometimes intimidating to their subjects. "The mice can also be easily trained, and thanks to their small size, you can use a small group of them and have multiple sensors," says Lumbroso.

The booths contain three sections, or cartridges, roughly the size of a small microwave oven, stacked one on top of the other, which are each home to eight mice. Each group of rodents works a four-hour shift, before the flow of air is automatically diverted to the next cartridge in line. The cartridges contain food and water which are renewed every 14 days when they are removed for cleaning and servicing. BioExplorers says the mice enjoy much better conditions than those of standard lab mice. They are trained over two months, with each mouse able to work for an 18-month period. While mice would not be efficient in detecting metals, which do not have a powerful odour, they can be trained to react to different kinds of narcotics, and dozens of kinds of explosives emanating from roughly 15 different "families" of materials, said Lumbroso. They can even detect the particular smell of money.

Full body scanners now being used in many international airports only alert examiners to suspicious shapes, while the mice efficiently zero in on suspicious odours they have been trained to identify, Lumbroso said. The mice also outdo the trace detection machines which analyse swabs wiped over people's hands and clothes, said Lumbroso. The company says it has a prototype of the system available which will be piloted next year. But mice are more than just efficient bomb detectors – they can also be used in the medical field, including the early detection of cancer, Lumbroso said. "People in the early stages of breast and lung cancer exhale certain particles," he said. "The mice could be trained to sniff them out."
Posted by arbroath at 6:08 am
Email ThisBlogThis!Share to TwitterShare to Facebook

Every 14 days? You joke. When I had a pet mouse, you needed to clean the cage every two days, and no less frequently. C'mon. After 3 days the smell of mouse urine would be enough to peel tiles off the wall.