Each morning and afternoon, the student crossing guards at Enterprise Middle School in West Richland, Washington, make sure their classmates safely get across the street - it's a pretty typical scene. But there's something else outside watching over the children - a black cat. "It will come out. I can see it when we're going out. It will walk out and come stand in its position" said Courtney Budge of Enterprise Safety Patrol. 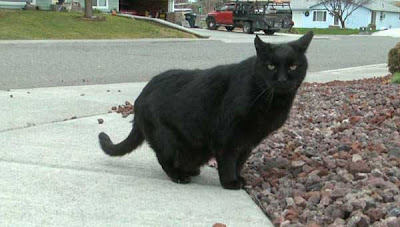 The 15 year-old cat, named Sable, comes outside every day - like clockwork - before the bell rings to watch the kids cross the street. "He just knows when to be out there, knows when it's time to go back in. And then in the afternoon, he knows when to be out and when it's time to go again. He's out there just like the students are, whether it's raining or snowing, or real hot and sunny, the cat is out there" said Monti Franckowiak, safety patrol advisor. Sable has been watching over the students from across the street for about a year.

Tamara Morrison owns the cat. She says one day, Sable just walked outside to greet the students, and he's been doing it ever since. "He just kept going out there, and we could watch him from the window and I thought, 'gosh, I hope he doesn't cross.' And he just hung out there and just couldn't wait to be next to the kids" said Morrison. And the cat isn't all business, it's friendly - brushing up on the legs of the crossing guards, and the students walking by always bend down to say hello.

"In the afternoons, when I work, its always come out and rubbed up against our feet" said Caleb Wolf, Enterprise Safety Patrol. "He just loves to be around us, I guess" said Emily Goodnight, Enterprise Safety Patrol. Students and teachers now think of Sable as part of the team - another volunteer who is dedicated to keeping the streets safe. "It's really cool, because you always know that there's someone there, and you're never disappointed" said Budge. Sable's owner has now bought a safety vest for sable to make him an honorary member of the Enterprise Safety Patrol.
Posted by arbroath at 6:05 am
Email ThisBlogThis!Share to TwitterShare to Facebook

Evil kitteh is just waiting for one of them to be run over, so it can steal the juicy bits.