"The villagers have issued an order to impose a fine of Rs 10,000 (£115, $185) if a girl is found using a mobile phone, while a married woman will have to pay a fine of Rs 2,000 if found talking on a mobile outside her house," the official said. A senior official at the police headquarters said it was the first such diktat issued by a village panchayat in Bihar. 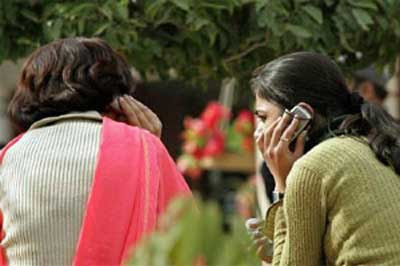 "There is no precedent to such an order issued by a Bihar village panchayat," the official said. "The decision was taken in a meeting attended by panchayat members and village elders," Mohammad Manzoor Alam, who presided over the meeting, said.. Mr Alam said the villagers, mostly elders, favoured imposing the ban.

"Mobile phone is the cause of all evils in our society, including increasing love affairs and the incidents of elopement," he claimed. Kishanganj is a Muslim-dominated district, and among the most backward districts in Bihar, with 60 percent of the population living below the poverty line.
Posted by arbroath at 6:02 am
Email ThisBlogThis!Share to TwitterShare to Facebook

"Mobile phone is the cause of all evils in our society,