A lioness on birth control pills has given birth to a record eight cubs in one litter at the Lion and Cheetah Park on the outskirts of Harare, Zimbabwe, a rare spectacle that has left conservationists baffled. The world over, lionesses are known to give birth to two cubs at a time and rarely, four. However, a lioness named Pasha, gave birth to eight. Wildlife doctors are now wondering if the contraceptive failed. 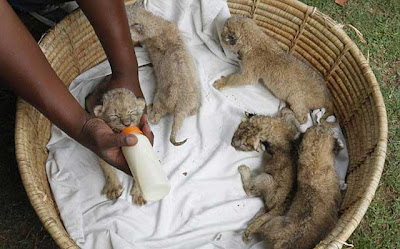 National Parks and Wildlife Management Authority head of scientific services Dr Hillary Madzikanda, described it as a world record. “This has never happened. It has never happened in the history of lions, the world over. It is actually a world record,” he said. “Normally, you get two cubs per litter and getting four is even very lucky. This one is a record. It is an achievement for this lioness.

“Surprisingly, the lioness was on a contraceptive pill. But this is really a world record.’’ The cubs that have been weaned off for their safety, being fed on supplementary milk through a bottle. “We are suckling them from the bottle each time they wake up from sleep,” said a senior worker.

“They still need a lot of milk and warmth and we are keeping an eye on them every minute. I have worked here for years, but I have never seen this. I think this is the lioness’ second birth. The first birth it had two cubs only and it was put on family planning pills like other lionesses here as a method of controlling breeding. How it got the eight cubs is still a mystery to everybody.’’
Posted by arbroath at 6:01 am
Email ThisBlogThis!Share to TwitterShare to Facebook

"Wildlife doctors are now wondering if the contraceptive failed."
Ya think????

It never even occurred to me that they'd make "the pill" for other species.