Guidelines are being issued to the Russian army to check soldiers for intimate tattoos but a defence source denied gay men were being targeted. According to the advice,  tattoos are a useful indication of character.

"Special attention should be paid to tattoos around the face, and on the sex organs and buttocks," it notes. The defence source said it was a matter of health and appearance, not soldiers' sexual orientation. The guidelines, which cover all aspects of military life, say that tattoos may indicate a "low cultural and educational level" and "possible sexual deviations". 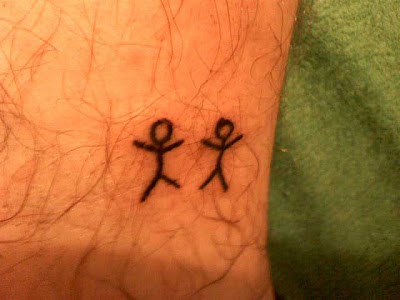 A young man who allows himself to be tattooed may be inclined to "submit to the will of others", they warn. Two unnamed sources, a military psychologist and a deputy battalion commander, argued that gay soldiers were an unwelcome distraction in the army.

However, an unnamed senior defence ministry official said: "The commander and his deputy should monitor the health of the soldier and his appearance, not his sexual experience and sexual orientation." The state of a soldier's skin was more properly a question for army medical commissions, he added.
Posted by arbroath at 6:03 am
Email ThisBlogThis!Share to TwitterShare to Facebook