In the heart of Tokyo an iconic skyscraper, the Grand Prince Hotel Akasaka, is being demolished. But there are no explosives or wrecking balls in sight. Instead, all that can be seen is the roof slowly sinking as the aluminium-clad building shrinks beneath it. 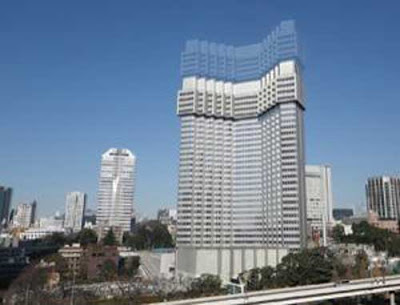 The demolition is being carried out by the Taisei Corporation, which has developed what it claims is a cleaner and more environmentally friendly way to tear down high-rises. Called the Taisei Ecological Reproduction System, it works from the top down, breaking a building apart floor by floor. The once 140-metre tall hotel is now missing its top 30  metres. By May it will have vanished.

The levels being dismantled are sealed within an enclosure that wraps around the building, while huge jacks slowly lower the original roof down as floors are removed. Fully enclosing the demolition area reduces the volume of dust particles emitted from the site by a factor of 100 compared with conventional methods, says Taisei's Hideki Ichihara.

Before demolition begins, all non-structural elements of the building are removed by hand. Workers then take out beams and concrete flooring, which are carried to ground level by a crane system that generates electricity as the pieces are lowered. By recycling building materials and getting rid of heavy machinery that runs on fossils fuels, Ichihara says, the process reduces carbon dioxide emissions by as much as 85 per cent.
Posted by arbroath at 6:05 am
Email ThisBlogThis!Share to TwitterShare to Facebook

Hey and guess what? The process is much, much more labour intensive and expensive than traditional demolition methods. So of course Taisei Corporation makes much more money from the process.

Unfortunately for them I doubt very many developers will want to use the method as it will push up the cost of development.