The father of a boy who was rescued after passersby joined police to form a human chain to pull him from heavy surf in Napier, New Zealand, on Sunday says he cannot believe how close his son was to dying. Josh McQuiod, 12, had been playing with a friend by the water's edge along Marine Parade when he was swept out to sea just before 5pm. He was dragged 150 metres along the beach and fought for air for eight minutes.

His father said after seeing footage of his son's rescue he "couldn't believe how close he had come to you know, actually dying". This was reiterated by Josh, who said: "When I was in there. I thought I was going to die. The waves smashed me so much, there were five really big ones, they flipped me around quite a few times, I was underwater."

At times Josh was underwater for up to 20 seconds at a time and fading fast. He said it was "like being in a washing machine you know, just boom, boom, boom". Several attempts to rescue Josh were made but neither a German tourist or police officers were able to hold on to him in the heavy swell. Eventually a police officer told those nearby to form a human chain to anchor the officer to the shore, allowing him to manhandle him to safety. 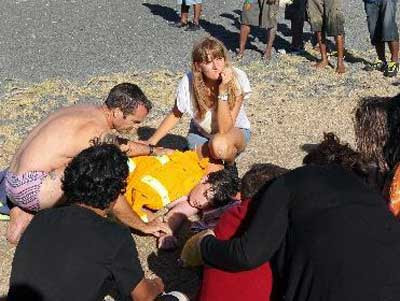 One woman who watched the drama unfold from the beach said: "It was amazing to watch and a huge relief to see the boy brought to shore. I really think if the police had not arrived at the scene so quickly he would have drowned." Josh was unresponsive, physically spent, and could not move unaided when he made it to the beach, members of the public gave him first aid. "I'd love to thank them so much for what they did, they saved my life, if it wasn't for them I'd be dead," he said. Josh was taken to Hawke's Bay Hospital by ambulance but has since being discharged.

There's a follow up news video here.
Posted by arbroath at 6:05 am
Email ThisBlogThis!Share to TwitterShare to Facebook

Riptides are no joke. It nearly killed me on the north shore of Hawaii in 1989. I was alone (private military reservation). Fortunately, I was a Marine in extraordinary physical condition and a well-trained swimmer. Even so, I barely made it out alive.

I had a similar experience at Kovalam beach in Kerala, south India, many years ago.

I wasn't drowning, but there was no way I'd have been able to get back to shore myself.

Thankfully an Australian guy and a British guy who were both really strong swimmers saved me.