Dead people would be buried standing up under an Australian council plan to make better use of space at cemeteries. The council in Darwin has asked the Northern Territory Government's Local Government Department to investigate if people can be buried feet first.

"Vertical positioning of the body in the ground is a good use of space," Alderman Gary Lambert said. The council also wants to see if up to three people can be buried in a grave in a "horizontal stack". 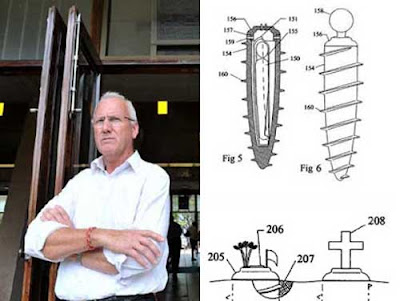 It made the requests after the government department began a review of the NT Cemeteries Act. Mr Lambert said people should be given options about how they were to be buried.

"There's a lot of merit in in-filling new burial sites that are eventually going to be surrounded by the suburbs where you can get a lot more people in the ground by standing them up," he told the council last week. "I wanted to make sure the act allowed for people to choose. You can get a more efficient use of space when you bury people upright."
Posted by arbroath at 6:02 am
Email ThisBlogThis!Share to TwitterShare to Facebook