Ikea has withdrawn chocolate almond cake sold in its stores in 23 countries after it was found to contain sewage bacteria. Faecal coliforms, bacteria normally found in human and animal waste, were detected in Ikea cake sold in China, and the Chinese authorities have destroyed nearly two tonnes’ worth.

The Shanghai quarantine bureau in China said it had destroyed 1,872 kilos (4,100lbs) of chocolate almond cake imported by Ikea that it said had excessive levels of coliform bacteria. The affected batches of almond cake with chocolate and butterscotch all came from the same Swedish supplier which exports to stores across the world, Ikea said. 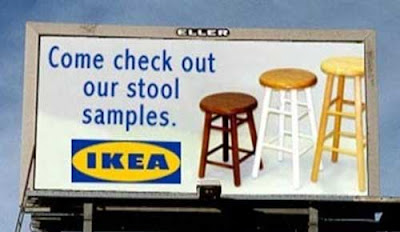 Now the Swedish furniture giant has recalled the cake from its outlets in a swath of countries around the world. Yet the company claimed there was no health risk. “The production batches have, as per safety and quality routines, been tested for bacteria that can cause health issues, such as E.coli, and none of these pathogen bacteria have been found,” a spokesman said.

“However, since the product does not comply with our strict food quality standards we have decided to withdraw the concerned production batches from sale in the 23 affected countries.” The countries concerned are Australia, Austria, Belgium, Bulgaria, China, Czech Republic, Denmark, Finland, France, Germany, Greece, Hungary, Italy, The Netherlands, Norway, Poland, Romania, Russia, Slovakia, Sweden, Switzerland, Taiwan and the United Arab Emirates.
Posted by arbroath at 6:03 am
Email ThisBlogThis!Share to TwitterShare to Facebook