Norwegian schools have moved exams that clashed with Justin Bieber's concerts in the country, fearing some fans would rather cut class than miss out on an evening with the Canadian heart throb. 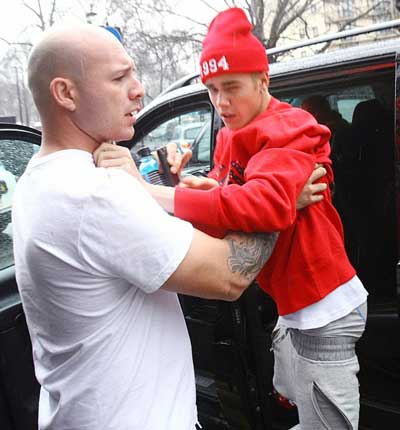 "We find it regrettable, but we preferred to move forward the Norwegian exams to avoid problems," Roar Aasen, the headmaster of an upper secondary school in Aalesund on Norway's west coast, said. In total, five schools in the town - more than a seven hours' drive from Oslo - decided not to hold exams on April 16 and 17 since they coincided with two of Bieber's three gigs in the Norwegian capital.

The tests, which would have been taken by around 500 pupils, will now be held on April 10 and 11. "We took this decision three or four months ago when we found out many students had already bought their tickets, because it didn't pose any organisational problems for us," said Aasen.

But the school is not setting "a precedent" for future concerts, he added. Bieber, who is 19, sparked chaos in Oslo in May last year when dozens of teenagers chased the singer's car in the hope of following him to a free concert at a location that was only revealed at the last minute.
Posted by arbroath at 6:04 am
Email ThisBlogThis!Share to TwitterShare to Facebook

The Beibs is looking like that picture more and more. Silly sod. He's going to end up like a lot of people who rise up to fame too early and too fast. Hope his mother spanks that ass.

Hey, it was his mother who pushed him forward to begin with.