A student says he was humiliated when a punt tout on the River Cam in Cambridge told him he was not attractive enough to work in the industry. Ben Cronin, a 20-year-old  student at Anglia Ruskin University, said that a punting sales representative made a personal attack on his appearance after he made enquiries about job openings.

The first-year psychology student made a complaint to nearby punting company Scudamore’s. The company has begun an investigation, but staff say they do not recognise the description given as a member of their team. Mr Cronin said: “I was with a group of university friends when two of us decided to enquire after punting jobs for next season. “A friend and I approached a sales guy standing on the bridge and I asked about jobs. 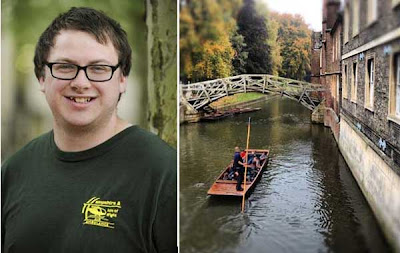 “He looked at us and replied in a bolshie manner, saying ‘sorry mate you have to be good-looking to do this job’.” Mr Cronin described him as being tall, brunette, and “built for the female population”. He said: “It felt like it was directed at me. It was so embarrassing, I just wanted to leave. All my friends were so shocked.” Mr Cronin had been punting four times before and had been keen to secure a job with a company for the next academic year.

The friends had gone down to the river at the weekend to enjoy some punting, but after the comment they decided to abort their plans. He added: “The way he spoke to my friend and I has put us off wanting to punt on the river ever again. It has made us feel really unconfident about how we look. I have low self-esteem issues anyway so to hear that from a stranger was even worse than hearing it from a friend.”
Posted by arbroath at 6:00 am
Email ThisBlogThis!Share to TwitterShare to Facebook

get over it... ugly woman cant sell makeup but i hear little complaints there

People should not be judged by the way they looks. That is especially bad if those kind of things are happening on the workplace. Many people hate to have a boss or someone who districs them. That's why freelance jobs are so popular, i have a freelance editing work myself, so i can freely work at hours that i decide without having a boss on my back.I believe that if you are a mature person, you don't need any additional observers.