A family who watched a dolphin leaping in front of their kayaks were stunned after it caught a huge fish and dropped it in front of them for their dinner. The group had spent several minutes enjoying the mischievous mammal which started swimming around their canoes off the Devon coast. But to their astonishment the friendly animal then dived down and dropped a massive cod next to Lucy Watkins, 14. The dolphin then resurfaced and began nudging the 10lb fish towards the teenager. 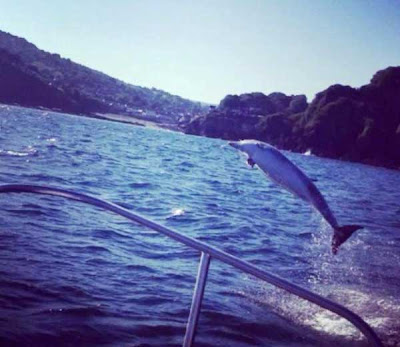 Lucy and her grandparents wondered whether they should pick up the floating offering in case the dolphin wanted it for himself. But the dolphin then resurfaced seconds later with his own fish, this time a seabass, and began tucking in. The family gratefully scooped up the cod, before taking it home to nearby Combe Martin to cook for their tea. Lucy said: “He definitely wanted me to have his fish. He first dropped it 20ft away but then pushed it to within 5ft of my kayak. Everyone was watching on the beach and we caused quite a stir when we paddled in with the cod.”

Lucy was astonished by the friendly dolphin which gave her dinner. She said: “It was amazing to see the dolphin. I have always had a love for them so going out to see one was very exciting. As we got out of Combe Martin Bay we started to see the dolphin splashing around I couldn’t believe my eyes it was so much bigger then I thought it would be. Once it started going under my kayak I felt comfortable with it and so I started playing with it, splashing my hands and feet in the water. 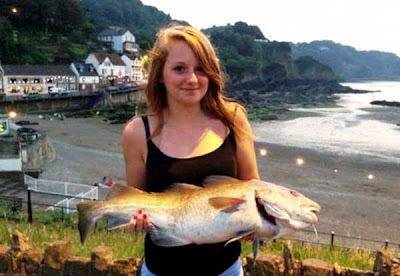 “I made me happy enough, and then all of a sudden it gave me the fish. To have this awesome creature which I had loved since I was little to give me a fish that it would normally have for dinner made me feel on top of the world.” Grandma Nina added: “It was as if he was saying to Lucy ‘Don’t worry, now I’ve got a fish to play with and so have you. This is mine for my tea, you have that one for yours.’ It seemed rude to refuse him so we took the fish and had cod and chips for supper. It was massive – I’ve still got half in the freezer.”
Posted by arbroath at 6:01 am
Email ThisBlogThis!Share to TwitterShare to Facebook