Fisherman who caught massive shark climbed inside for photo

An Australian fisherman celebrated catching a huge shark by climbing inside the gutted carcass, poking his arm through its gills and posing for a photo with his knife buried between its eyes. 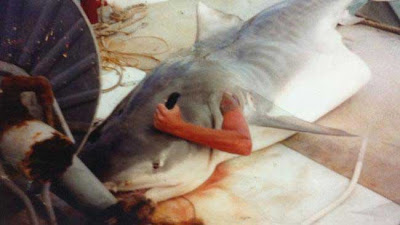 'Arch', who works at the Metung Hotel in Gippsland, Victoria, was present when the photo was taken. He mounted the picture on the hotel's wall and forwarded it his friend, 3AW Radio's Breakfast show host, John Burns

Mr Burns told listeners about the reaction of an American couple who saw the picture at the Metung Hotel.

"An American couple have turned up at the Metung Hotel to see this photo and the immediate response from the wife was 'Did he survive!?'."
Posted by arbroath at 6:03 am
Email ThisBlogThis!Share to TwitterShare to Facebook