The Regina Humane Society in Saskatchewan, Canada is seeing red after a video taken over the weekend showed someone walking a dog while driving beside it in a van. “It’s incredibly dangerous,” said Don Simons of the Humane Society. The video was captured on Sunday night near Douglas Park. 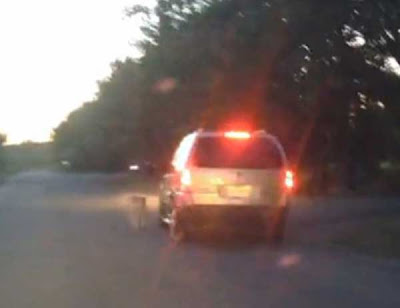 In the video a van is seen with its hazards on while a dog walks beside it. It is dusk and cars are driving by. “(If) it sees a squirrel, it sees a rabbit, it wants to swerve around a rock or a pothole, then it can very easily get caught up under the wheel,” Simons explained. Simons says if someone is physically unable to walk their dog, many other options are available.

“There are dog parks in town where you can maybe take your dog if that’s a problem,” he said. “Of course, there are family and friends. There are dog walkers.” Simons says it is dangerous whether in the country or in the city. The Regina Humane Society said it will consider pursuing charges if any dog is killed or injured while being walked by someone driving a vehicle.

Regina police say it is not just dangerous for the animal, but for drivers around them. “There might be evidence under the Traffic Safety Act of either obstructing traffic, or perhaps driving without undue care or attention,” said police spokesperson Elizabeth Popowich. In this case, police were called and the driver told officers he was walking the dog for a friend. He agreed to never walk an animal in that manner again.
Posted by arbroath at 6:03 am
Email ThisBlogThis!Share to TwitterShare to Facebook

What a lazy, useless fuck. It's like the people in my neighborhood who will get in their cars and drive to the community mailbox -- which is literally 200 feet from their house. It actually takes them longer to pick up the mail that way, but GOD FORBID their fat asses should walk anywhere.