A police official in Virginia has defended displaying an electronic billboard sign issuing drivers seemingly obvious advice: “Don’t hit the car in front of you.” The sign was purchased and erected just outside Washington D.C. by the Arlington County Police Department, costing taxpayers about $13,000, Lieutenant David Green Jr. said. 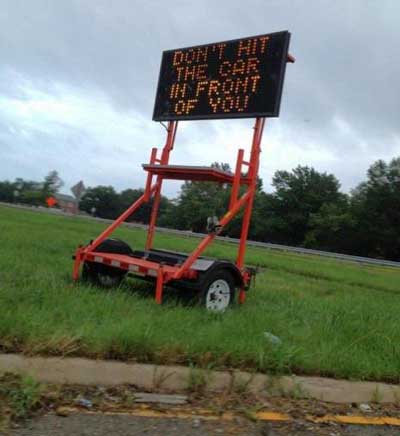 He defended the sign, which has been displayed for about two months, saying the area is “one of the highest accident areas in the County.” “Almost 100% of the accidents at this location are rear end collisions,” he added.

Local resident, Amanda Anderson, said the sign was an example of government waste and said she trusts individuals not to “purposefully hit the car in front of them.” “I am dismayed to see my hard-earned tax dollars going towards expensive signs which tell me what to do,” Anderson added. 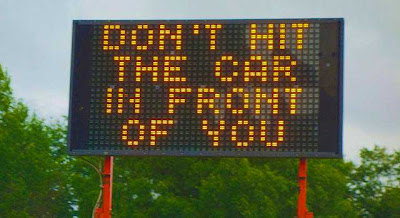 Another local resident, Paul-Martin Foss, said the sign in and of itself poses a threat to drivers on the road. “Not only are these types of signs insulting to the vast majority of us who are competent drivers, but they’re also incredibly dangerous,” Foss said. He added that “money is being spent on patronizing signs that state the obvious and cause the distracted driving they’re ostensibly intended to prevent.”
Posted by arbroath at 6:05 am
Email ThisBlogThis!Share to TwitterShare to Facebook

When I was in DC one time, we were driving down to VA to visit our son. There was a state cop in uniform with his sunglasses on and took the arms on his hips pose on the freeway. That was more imposing than this sign would ever be. That happened over five years ago and I still feel intimidated.

Ahem, the default password for most of these signs is certainly not DOTS, no Sir.

The password DOTS wouldn't let you change the sign to things like "UNTOLD EVIL AHEAD" or "MONOCLE STEALING BATS, 200YDS". Similarly, if they did change the password, pressing reset certainly wouldn't set it back to the default.