Woman begs at side of road for bigger boobs 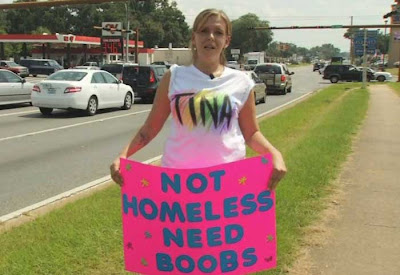 Andrews from Pensacola, says she’s just being truthful. "I just want bigger boobs, because I'm not happy with the ones that I have. I figured this was a good way to do it. People put out signs that they’re homeless. I'm not … I’m just being honest,” Andrews said.

Andrews says she wasn’t sure what kind of reaction she would get, or if she’d actually collect any money. She did, but that wasn’t the only goal. It is the first time Andrews tried the stunt, and she says if nothing else, she’s made people laugh.

"I thought people would just laugh and keep riding, but they're like hey, here's some money,” Andrews said. “I’ve gotten a lot of smiles out of people too!"
Posted by arbroath at 6:05 am
Email ThisBlogThis!Share to TwitterShare to Facebook

The money would be better spent on counselling to raise this woman's self-esteem, rather than surgery with all its inherent risks.

Wonder what would happen to a guy holding up a sign that said, "Need 3 more inches."

Start a kick starter, I will contribute.