A severely injured chicken found in a South Florida park is believed to be the victim of a Santeria ritual after a photo of a family and other items were discovered inside the animal's breast. Miami-Dade County Animal Services said the bird was found at Larry and Penny Thompson Park. The chicken, named Trooper, was then taken to Katha Sheehan's chicken sanctuary in Florida City. "The person who found him and I looked at him, and she said, 'That thing is protruding from his chest. It doesn't look like keel bone," said Sheehan. 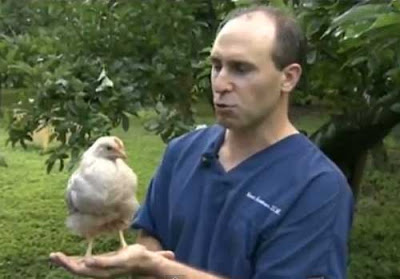 Veterinarian Dr. Marc Kramer said the items found inside Trooper leads him to believe the chicken had been used in a Santeria ritual. Sheehan cut the makeshift stitches to remove what was inside approximately one inch deep into the animal's breast. She then found a 4 by 6 photo of three young adults, two women and a man, wrapped up and stuffed inside the 2-month-old chick, along with another piece of paper with a drawing of a skull. 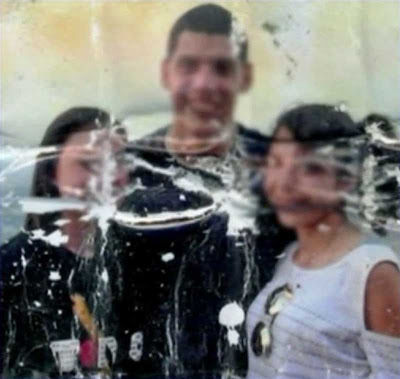 Officials said, on the back of the photo was another drawing of a skull and several hand-written names. Miami-Dade College anthropology professor Mercedes Cros Sandoval explained, "This is a magical ritual of Cuban origin, probably, with the name 'Sarabanda,' which is a deity from the Congo area that was probably used to affect the relationship of these three young people." "To me it is alien, the idea of casting your sins on innocent animals," said Sheehan.

"The animal was probably manually restrained, struggling, and in a lot of pain. This is a living thing with a nervous system that feels pain like every other animal," said Veterinarian Dr. Marc Kramer. "It's not only an extremely cruel act to do this to any living thing, but it's also illegal." After two weeks of treatment, the bird is doing better but still has a long road ahead to fully recover. "It's in reasonable spirits, though looking somewhat pale and still dealing with a large infected wound," said Kramer. "It has a good appetite and the will to survive. Trooper is going to be a happy and productive member of society," said Sheehan. Trooper is being kept at the home of one of his rescuers.
Posted by arbroath at 6:06 am
Email ThisBlogThis!Share to TwitterShare to Facebook