A man has been charged with causing over $600 damage to a restaurant door as he was annoyed with being charged $3.25 for a serving of bacon.

Mark DaCosta admitted smashing the glass door of the Paraquet restaurant in Paget, Bermuda - owned by his cousin, Jonathan Correia - but pleaded not guilty to causing wilfull damage, claiming it was an accident. 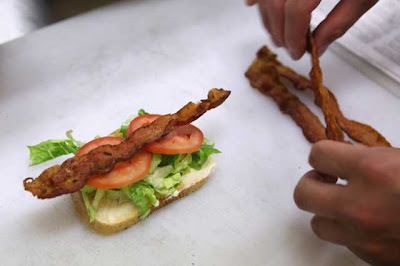 Mr DaCosta said he was “irate” after being charged $3.25 for a plate of bacon, and in his anger accidentally broke the door after trying to open it with his foot. He added that he had spoken to his cousin and promised to pay for the damage, but was subsequently arrested by police. “We are cousins. We pinged marbles together,” said Mr DaCosta.

“This is a huge waste of time. It’s a family owned restaurant. I would never do that on purpose. I go there every week.” Mr DaCosta said he has been eating at his cousin’s restaurant for over 15 years. “Nowhere in Bermuda do you pay $3.25 for bacon,” the 34-year-old told the court. The trial is set for November 19.
Posted by arbroath at 6:05 am
Email ThisBlogThis!Share to TwitterShare to Facebook