When Bob Carey discovered his wife, Linda, was diagnosed with breast cancer in 2003 his reaction was far from ordinary: he donned a pink tutu and embarked on a one-man mission to make her laugh during her chemotherapy. 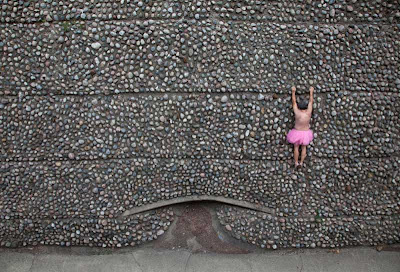 “After Linda was diagnosed, that’s when I went into self-therapy mode. I grabbed a tutu and we went out and started making pictures,” said Bob, a professional photographer. He began to take pictures of himself clad only in a pink tutu in different locations to keep his wife’s spirits up during chemo. 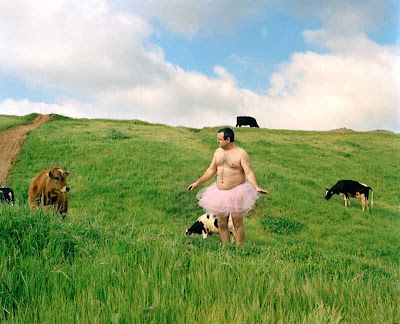 Bob’s photos were so popular that the couple decided to found ‘The Tutu Project.’ As part of the initiative, he embarked on a journey around the US and to different countries, taking photos of himself in his pink tutu to contribute to the ‘Ballerina book.’ Bob has braved rain, snow and freezing temperatures to raise awareness for breast cancer sufferers.

Bob has already sold 3,000 of the 5,000 books he has printed, donating the proceeds to The Carey Foundation which was formed at the same time of The Tutu Project.
Posted by arbroath at 6:05 am
Email ThisBlogThis!Share to TwitterShare to Facebook

Yeah, I don't know, his wife may have preferred to have him by her side.

I agree William, that was my thought too. It just felt to me like he was running away and then making everything all about him.