A rabbit has been hidden in right ear of the newly erected Nelson Mandela statue at the Union Buildings in Pretoria, South Africa. The sculptors of the nine metre bronze-plated statue, Andre Prinsloo and Ruhan Janse van Vuuren, secretly added the rabbit to the work. 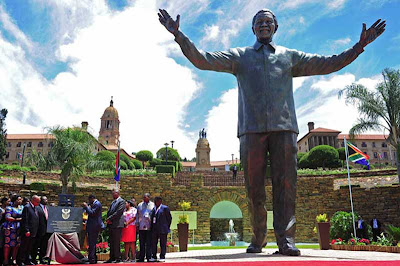 The duo have said the rabbit was a “small trademark” of their work after the department of arts and culture did not allow them to engrave their signatures on bottom of the trouser leg of the statue. They said it also represented the tight deadline they were working under as rabbit in Afrikaans “haas” also means haste. 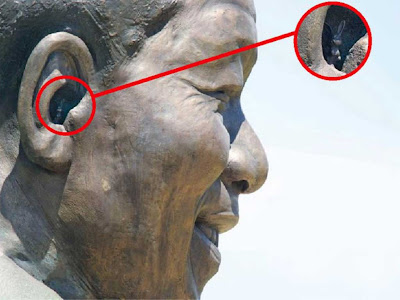 “The time factor was big and at times we had to work hard,” Prinsloo said, adding that the “small symbol” was hidden in the ear and it did not take anything away from the statue. “You need a long lens or binoculars to see it,” he said. “During the moulding process a lot of people had seen the statue up close and nobody noticed it.” 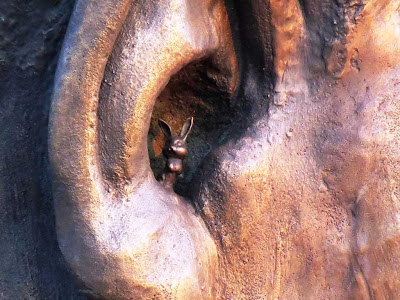 Department of arts and culture spokesman Mack Lewele said he was not aware of the addition to the statue and it would investigate the matter. “We can't comment until we have seen it with our own eyes,” Lewele said. He did not say whether the department would consider removing the rabbit.
Posted by arbroath at 6:02 am
Email ThisBlogThis!Share to TwitterShare to Facebook