A nine-month-old boy was arrested by Lahore police for the alleged attempted murder of a police officer and was even presented before a session judge’s court on Thursday. The ‘accused’ was granted an interim bail after he appeared in Judge Rafaqat Ali’s court with his grandfather, Muhammad Yaseen. However, the infant started crying in the court when his grandfather held his thumb to dip it in ink and put its print on the bail bonds – since the tot could not sign it himself. 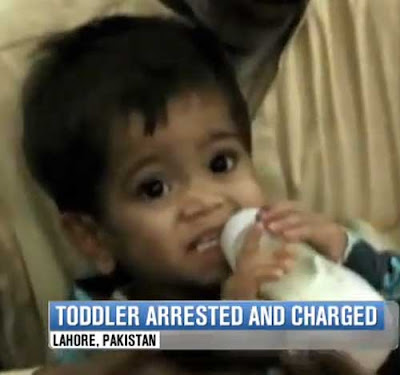 According to the First Information Report (FIR), the baby, along with his uncles and grandfather, attacked the police officers, bailiff team and some Sui gas employees with wooden rods and pelted them with stones. While the infant was being formally charged during Thursday’s hearing, he was busy drinking milk from his bottle. A police team along with a bailiff and some Sui gas employees raided Muhalla Thanedaran to sever gas connections of houses that had not paid their dues, the FIR reads.

Muhammad Yaseen, his sons Irfan and Imran as well as Imran’s son, first pelted stones at them and then attacked them with wooden clubs, causing the police team and Sui gas employees to run for their lives. ASI Kashif, the complainant, said the accused caught him and beat him up, giving him a head injury. They also threatened to kill him, he claimed in the FIR. Police lodged the FIR against all of Muhammad Yaseen’s family members, which unilaterally also included Imran’s son. But they did not bother to find out that Imran only has one child, his nine-month-old son, whom Yaseen then brought to court for the hearing. “He was nominated in the FIR so I took the child to court,” he said.

Police were quick enough to shift the blame on the plaintiff of the FIR, ASI Kashif, saying they did not know that one of the accused was a child. Taking action, DIG Operations Rana Abdul Jabbar has ordered the suspension of ASI Kashif for lodging an FIR against an infant, but the move was taken only after the nine-month-old ‘suspect’ got bail from the judge. DIG Jabbar said, “A nine-month-old can never commit such a crime. This incident took place due to sheer misunderstanding on the police’s part and was not done on purpose.” Punjab Chief Minister Shahbaz Sharif and Minister for Human Rights and Minorities Affairs Khalil Tahir Sindhu also took notice of the incident and have sought a report.
Posted by arbroath at 6:04 am
Email ThisBlogThis!Share to TwitterShare to Facebook