A German-flagged container ship ran aground off a sports ground of the University of Hong Kong in Pok Fu Lam as heavy rain and severe winds battered the territory on Sunday afternoon. 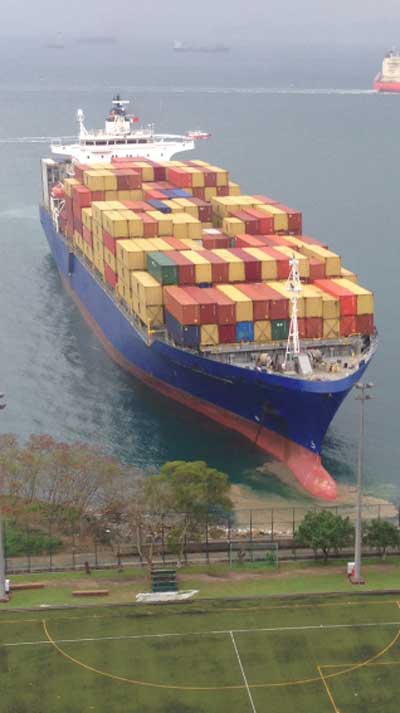 The 193-metre (631-foot) Hansa Constitution sailed from Yokohama in Japan on Wednesday and arrived in Hong Kong. But it had a mechanical malfunction when it was about 200m from the sports ground at about 3pm, the Marine Department confirmed.

The ship went off course after losing power and was slowly blown toward the sports ground as the rain and wind hit. The department told the vessel to take emergency measures and drop anchor.

But it ran aground and touched the stone beach with its keel while its bow was only four metres away from a jogging path. Tugboats, towed the vessel to about 500m off Lamma Island for examination. Marine, police and fire services went to the scene. No one was injured and there was no oil leak.
Posted by arbroath at 6:03 am
Email ThisBlogThis!Share to TwitterShare to Facebook